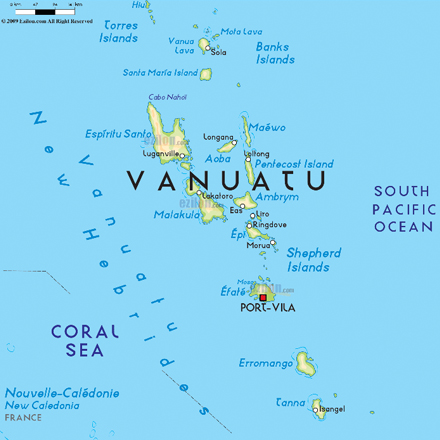 Sandalwood oil is distilled from the heartwood of the semi parasitic tree, which can be found in over 10 distinct regions of the world. Highly valued in perfumery for its deep, woody aroma and antibacterial properties, we use sandalwood in our Luxury Bath Melts and skincare to tone and soothe the skin.

The tree is primarily grown in India, which is where we used to source our oil from until we became aware of the illegal trade- forcing us to cut all ties with the supplier. We now source our oil from a sustainable supplier in Vanuatu, where our buyer Agnes visited in 2009 to learn more about how they’re taking steps to improve the trade of Sandalwood all over the world. The following is an excerpt from her adventure to the gorgeous, volcanic islands: Vanuatu is a beautiful, wild volcanic archipelago that lies a 3 hours flight from Northern Australia and is 500 km from New Caledonia, where I had already ventured to a few years ago.

Vanuatu feels a lot more like a wild outpost and is totally fascinating. The language spoken by the Ni-Vanuatus struck me as the perfect illustration of Vanuatu’s history. The local language is Bislama, but French and English are also spoken, reflecting the fact that from 1906 England and France “jointly managed” the archipelago as the New Hebrides. In the 1970s, an independence movement emerged and in 1980 Vanuatu regained its independence as the Republic of Vanuatu.

Neville, the producer of the sandalwood oil we purchase, was waiting for us with his business partner Jim and after quick introductions I was whisked away to another part of the small airport to be publicly weighed – lovely tunes and ritual humiliation. Neville had decided that the island of Tanna would be our first port of call as a lot of the sandalwood trees grow there; this would involve travelling on such a small single prop plane that every ounce of human and luggage has to be accounted for precisely to ensure a safe journey over the Pacific Ocean.

As we walked across the tarmac I tensed up: our plane had more in common with a winged Mini than anyone in their right mind would ever wish for. After about 20 minutes, with Efate left well behind, all that was visible was the vast expanse of the Pacific Ocean stretching below us for uninterrupted hundreds of miles. Although we were tightly packed in the small plane, it felt very lonely up there, looking on as the pilot kept adjusting his GPS the sky was full of clouds, which we could not fly over and every one we went through felt like a solid threat to our tiny machine. We finally reached Tanna in one piece and with sighs of relief all around; never have I been so happy to disembark!

Tanna has a constantly active volcano, Mount Yasur, which also happens to be one of the most accessible in the world and this was to be our next destination. This was an experience I will never forget: the ground was littered with cooled lava lumps and ash, the only light was the deep red glow coming from the molten lava in the crater above us, but what astounded me the most was the noise of the volcano itself.

The volcano sounded like a violent sea, the lava below moving in heavy waves, hitting the sides of the crater and creating a deep, slapping, rumbling din. We finally reached the crater’s edge and peered into the volcano’s red, hot glow. Our guide was attentive to every shift in wind direction, testing it by throwing a handful of ash into the air every now and then. When I asked him what he was doing, he simply told me: “You wouldn’t want to be downwind when it blows… 3 Japanese tourists died last month; they went up alone and didn’t know what they were doing.” When the volcano erupted I understood what he meant.

As the sound of the lava waves below intensified, he simply said, “it’s gonna go now” and sure enough it did – enormous bombs of molten lava exploding in the air above us, amazing natural fireworks, which landed still lit and burning on the opposite edge of the wide crater. We stayed up on the crater’s edge for an hour during which the volcano erupted again and again.

After a well-deserved night sleep in a wooden bungalow on the edge of the Pacific and a breakfast of local fruit, Neville led us into the island’s forest to show me the sandalwood trees our oil is produced from. Neville’s father was a forester and worked in the timber industry for most of his working days, from his early years Neville travelled with his father to Vanuatu on timber business and has a real affinity with the local families. He has been working with them on ensuring the sustainability of sandalwood on the islands for many years and is obviously liked and respected.

The local farmers would regularly approach him during our visit to ask him for tips on re-planting sandalwood trees, avoiding tree diseases and to give him news on new areas where they had found more sandalwood trees growing and the age and state of the trees. The Ni-Vanuatu Forestry Department only grants two licenses every year for 40 tons of wood each. Neville holds one of these licenses. Neville is extremely aware of the debacle surrounding Indian sandalwood, where so many unsuitable young trees have been taken out of the ground and sold on the black market that it has become very difficult to find genuine Indian sandalwood essential oil not linked to deforestation and dubious traders’ operations, and his aim is to avoid the same situation arising in Vanuatu. He struck me as genuinely passionate about making sandalwood a sustainable trade, not only for his company, but also for the local population.

As a result of this, Neville has been working with the locals to encourage them to replant seeds as they take trees. Neville has encouraged the villagers to plant trees on their land alongside their vegetable and fruit gardens, where they have already harvested existing mature trees and during my visit I came across some truly impressively managed small plantations varying from a dozen trees to several hundred. The largest one I came across was owned by Andrew, he had replanted around 1,000 trees, which were all healthy and striving, it was a joy to see all this positive work done around sandalwood replanting.

After spending the night in Port Villa, the main town on Efate, we met up with Jim, Neville’s business partner, and went to visit the small factory where our oil is produced. Neville manages to produce between 700 to 1800 kg of sandalwood essential oil per year in this small basic facility. In an effort to bring an income to the local population, Neville also runs his boiler on coconut oil made on the premises. The coconuts are purchased from local families who harvest them on their small holdings, and are processed into oil by a team of three local women employed on a full time basis. We also went to visit Jim’s sandalwood plantation on the hills outside Port Villa. Jim is also an Australian expatriate who has been living on Efate for many years; he has built a home there, leased 100 hectares of land overlooking Mele Bay and for the last ten years has been planting sandalwood trees.

New planting is constantly rolled out on the estate to ensure continuity of availability and also simply because Jim and his team are always trying to improve their planting methods and the resulting trees. I saw trees in many stages of growth, some looking stronger than others, and Jim showed me how the trees were being trimmed to get rid of small branches and twigs to create straighter logs and encourage the formation of heart wood which will eventually give the best oil. It seems that the more a tree is stressed (naturally by being twisted and damaged by hurricanes for instance or artificially by being trimmed), the more precious heart wood it produces.

Jim expects his first mature trees to be ready for harvesting in the next 3 to 5 years and in the meantime, he continues experimenting with different growing conditions to fine tune the quality of the results. Both Neville and Jim are full of ambition and positivity for their joint project and it was very refreshing to see such efforts and genuine involvement going on in an industry which has unfortunately been marred by the destruction of natural resources and the actions of a powerful mafia in India and generally anywhere Sandalwood trees are to be found.

I left Neville and Jim feeling that the oil, which we purchase from Vanuatu, is genuinely not contributing to any negative environmental impact, but that we are actually supporting a healthy process of making the specie more secure.